400 steps lead up to Phnom Chisor, a hilltop Khmer site built in the 11th century A.D.

But the long and sweaty climb up the mountain is very rewarding when it is completed. After Preah Vihear (which we will cover sometime later) this is the site which offers the most spectacular views of the surrounding land.

Phnom Chisor is of course in southern Cambodia, south of Phnom Penh and required our own transportation. Luckily my guide arranged everything, including the best timing to climb up the mountain, which was originally called Suyaparvata, or the Mountain of the Sun God. And it is a name that is fully deserved!


What a difference to other temples this was! No tourists at all! I loved it and it was a site which makes a photographers heart smile!  Here too we had one child, which sold cold drinks just before we made it to the top of the mountain, follow us around and acted as a self-made tour guide. She never really said a word, but it was a way for her to earn a little tip :-)


There is a modern monastery right next to the temple, just before we approached the huge Buddha tree and the main temple site.


Standing on the edge of the steep cliff we were able to make out other remains of Phnom Chisor down on the plains. They all formed a straight line from the main sanctuary towards Angkor and a steep 400 stairs would lead up to the temple and had to be climbed in ancient rituals.


We truly enjoyed every lintel and every carving in this temple which frequently displayed Kala and the Hindu trinity or Brahma, Vishnu and Shiva, their consorts and vehicles.


In the main sanctuary is a small shrine which is managed by a local Brahman, who will assist visitors during a prayer and a blessing ceremony.


I was really taken by this site and we spent much more time up here than planned, enjoying the views and studying every building and carving of the temple.

After seeing Phnom Chisor, I decided that we would not continue to drive down south to visit Phnom Da, another site. It would have taken away from the great experience we had up here and would have required hurrying through both sites without doing them justice.


Posted by Asian Wanderer at 17:55 No comments:

The Khmer empire in books 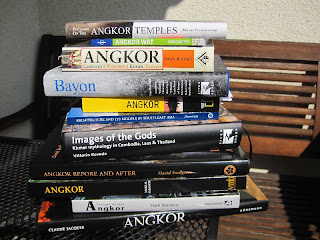 OK...OK, I admit it...I am a nerd when it comes to archaeological temple sites. I do lots of prep work before visiting the sites, I get more information during the visits and I read whatever I can after my visit. Be it the Borobodur or Prambanan on Java, Ayuttaya or Sukhothai in Thailand or those hundreds of Khmer temples I have visited in Thailand, Laos and of course in the Kingdom of Cambodia. 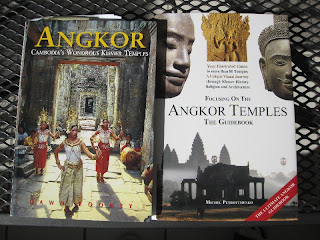 As promised at the beginning of this blog, here is a list of the books I used to study the temples. Well, it's rather a stack of books which I used for my visits to Angkor. Some are in German, most are in English. Some are pure guide books and some focus on the whole history of the Khmer empire. All are good and all are different, focusing on a different method to visit the temples.

My two favourite books are the following: 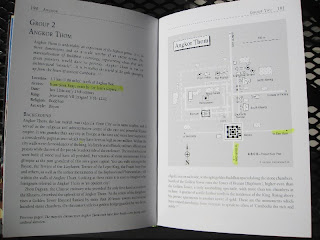 This is my bible to visit the temples. I had an old edition back in the year 2000, which was of great value to us. As I mentioned before though, I made the error to think that I could use the book and read it as a guide while walking alone through the temples. That mistake I would not repeat anymore. The book is great for background information in combination with a really good tour guide!  For my 2012 visit to Angkor I used a new edition, much thicker and with much more information and more plans. I love the suggested temple itineraries and followed them as much as possible but with slight variations which my tour guide suggested (to avoid the masses). The book offers great but basic maps, some colour photos and lots of detailed information on the temple's location, access, tips, background information by temple. A real value when visiting Angkor & beyond.

The second book that made it to the top of my list is a new book which I just bought as I boarded my plane in Phom Penh in 2012. Its the first edition (2011) of:

Focusing on the Angkor Temples - The Guidebook, by Michel Petrotchenko. 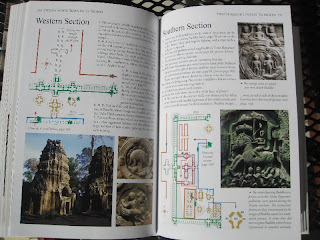 While I was sceptical at first when I read the red side bar on the book, stating "THE ULTIMATE ANGKOR GUIDEBOOK", I still had a look inside. And I was seriously wow'ed! This is truly a one of a kind guide book. It has every piece of information about the temples, it's history, it's architecture, it's specialties in any combination one could possibly think of.  While it contains a great set of history and on religion it contains the most detailed and most in depth and colour coded maps on the temples I have ever seen. Different colours for the various stones used and even colour codes for collapsed sections of the temple. Zoomed-in plans followed by detailed plans narrated by "annotated" plans. It might be more than the casual Angkor visitor can handle but it is the dream for anyone who wants to do the great Angkor Wat temples justice and understand them in more detail. I am looking forward bringing it with me on my next trip! Again, the book and my personal (human) tour guide will be a great combination!

Posted by Asian Wanderer at 21:49 No comments:

Temple of the Black Virgin

Prasat Neang Khmao, or the temple of the black virgin, was a site we visited on the way to the breathtaking site of Phnom Chisor. Located in the south of Cambodia, we undertook a special trip to this remote place.

It is only a small site, where my tour guide usually starts his tour and delivers his overview on the area and the sites which we were about to visit. A modern temple with many young monks is part of the site which dates back to the tenth or eleventh century A.D.

Prasat Neang Khmao consists of two brick and sandstone towers and a small pagoda of a newer date in one line next to each other.

Back in time, this site here connected an ancient highway between Koh Ker and Beng Mealea sites, to the east of Angkor Wat.

My tour guide got one of the officials of the temple to open the locked doors for us, so we could take a look inside the large tower and see the original brick stones and the deities which are kept inside.

The lintel above the door of the left tower is one of the noteworthy items, as are the octagonal columns of the door frames.

Prasat Neang Khmao is a very quiet place with rice fields, farmers and cows being about the only things to see in this rural part of Cambodia.
Posted by Asian Wanderer at 20:58 No comments:

Far from Phnom Penh and also far from Siem Reap lies this isolated place in the Cambodian jungle. Sambor Prei Kuk, or Isnapura, the city of Isana, dates back to the early seventh century A.D.

We decided to visit this remarkable site as part of our day tours from Phnom Penh, and it did fill the entire day due to the distance and the road conditions we had to deal with. Rainy season was just about to begin, and we had some of the worst road conditions of our entire trip. Luckily the heavy rain started to hit after we had just made it back out of the muddy road with connects Sambor Prei Kuk with the main highway. Otherwise we would surely have been stuck there for a while.

Once one of the largest capitals in the region, my tour guide told me that the ancient Chinese documented this site as the ancient capital of Zhenla, which of course was way before Angkor.

I did not know what to expect, only that it would be an awesome site to visit (and an expensive trip). To my surprise we were the only visitors to the huge site and we were told by the locals that only 8 people had visited on that day in June. The hordes of children selling scarfs and other things were obviously very eager to make a sale and would not leave until I just bought a few from each one. One of the boys actually walked with us the entire way through the monuments without ever speaking a word.

I had my tour guide but another self-proclaimed tour guide walked along with us. Another way for the locals in the forest here to earn a living. My tour guide was actually nice enough to explain him a few things and teach him how to act a bit more professional. Some of the monuments in the Northern group were under restauration and blocked off, so we could not really get too close to them.

Sambor Prei Kuk is set up in three different areas which are all spread out in the forest. The Northern group, the Central group and the Southern group.  There are no signs pointing the way, so this site is impossible to explore without a guide.

My guide also explained that this site is the place of temples in octagonal shape, though we did also find square and rectangular buildings. There are some remarkably carved lintels and beautiful door frames and columns to see, besides the whole setting of temples in the jungle.

A few of the gateways and towers have been overgrown with trees and were more picturesque than those sites in Angkor Wat which are filled with hundreds of tourists. The only people we saw here were the little children which kept coming out of nowhere to sell their products. They were all nice and friendly though and in the end they all earned some money. And they were the complete opposite to some of the kids we faced at Ta Prohm temple south of Phnom Penh.

Interestingly at this site I was confronted with the corruption of officials working in the monuments. The entrance fee of 5 U.S. $ was waved when I asked for a ticket and replaced by 2 U.S.$ which immediately disappeared in the pocket of the guard. I don't know if this is a standard procedure or just an exception, but salaries our here are obviously not very high, so people try to make some money.

Posted by Asian Wanderer at 23:54 No comments: