A hike up to the River of a thousand Lingas

Kbal Spean did not rank very high on my list of places to visit in Angkor, though I had read about it. The reason why it was more of a 2nd or 3rd tier to visit was merely because I had no real idea what was there to see. It was not a temple ruin like the ones I had visited over the past few days. I also had no idea if there was any water in the river or if the area was even attractive at all.

But since Kbal Spean was close to Banteay Srei I decided to add it to my list of places to visit. The area here is part of Phnom Kulen, which is considered the holiest mountain in Cambodia by most Khmer.

I had read that this site required a climb up a mountain, so we brought water, sunscreen and a hat. My guide had picked a time which was again contrary to that used my most visitors and we were almost alone on the way up. We only met a few people who came back down from the mountain and I asked almost everyone how they liked what they saw up there. It was very hot and humid and I wanted to make sure it was really worth the sweaty climb. Two English girls said that it was an amazing site and so I continued the hike up the mountain on a steep and rocky path.

The area was breathtaking, with monolithic rocks, covered with roots from trees. Some of it looked unreal and the jungle was thick, despite the amount of tourists who undertake this climb. Luckily we did stop a few times to catch our breath...well, MY breath, since my guide just stormed up the hill and then just waited for me to follow. But there were actually nice and shaded areas where we got a great view over the valleys and the forests below. 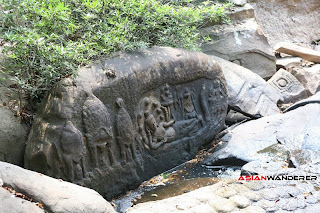 Once we reached the top we came to the river Ruisey and its spectacularly carved riverbed, which is covered with lingas and images of Hindu deities. A small sandstone bridge spans the riverbed and allows crossing the river as well as providing a great view onto the carvings. Unfortunately some of the carvings were hacked out and I got different explanations as to why faces of gods were missing.

My guide showed me images and details in the water, which I would have missed. Some, I could not make out until he pointed it out as we walked along the river upwards from the sandstone bridge. The water from the spring flowing over the lingas and images and thus making it "holy water". That fact and the serene and natural setting it was in made the whole area a real fascinating site.

Further down were more lingas in the water in the shape of a Mandala, carvings on the rocks and after climbing over roots and down the rocks we came to a small but very scenic waterfall. It was here, where the words from the English girls I had met before became true - hundreds of butterflies in a real natural and beautiful setting!

Surprisingly the way back down was as strenuous as the way up and I had trouble finding a stable path to walk on as we climbed over roots and rocks. Good shoes are a definite must here!

Kbal Spean is definitely worthwhile to visit and a bit of reading about it's  background and history makes it a real experience away from the masses of tourists.
Posted by Asian Wanderer at 00:28